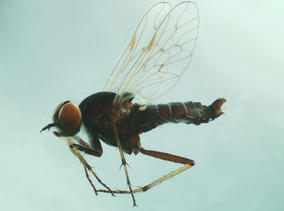 Length, 8 to 11 mm. Coquillett described males as similar to the species otiosa, which he described at the same time in the genus Thereva (now also in Acrosathe). He noted the following exceptions: Style of antennae two-fifths as long as the third joint ; pile and bristles of vertex and bristles of occiput yellowish-white ; thorax is without the black pile of otiosa ; knob of halteres is brown, margined with yellow ; veins of wings largely yellow, stigma also yellow and indistinct.
Coquillett then stated that females of this species differed from females of otiosa not only in the ways that the males did above, but that the front is missing the two round velvet-black spots, having instead a narrow, interrupted, dark-brown cross-band ; eighth abdominal segment opaque pollinoise, its pile largely yellow.
See photos in Morphbank http://www.morphbank.net/Browse/ByImage/?tsn=131783